[3:181] GOD has heard the utterances of those who said, “GOD is poor, while we are rich.” We will record everything they said, just as we recorded their killing of the prophets unjustly, and we will say, “Suffer the retribution of Hell.

People who utter such words that “God is poor, while we are rich” don’t believe in God. They use these expressions to mock and ridicule. They use phrases like this to boost their ego and position in this world, and fail to realize. Expressions like these are seen in modern day financial circles, with such titles as “More Money Than God” and “Lords of Finance”.

The disbelievers are consumed by money. Money becomes their god and the metric by which they judge everyone by. 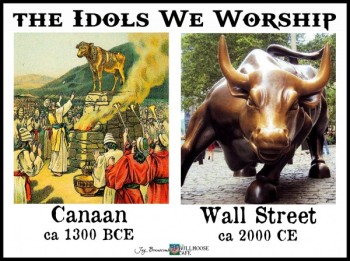 [25:7] And they said, “How come this messenger eats the food and walks in the markets? If only an angel could come down with him, to serve with him as a preacher!”
[25:8] Or, “If only a treasure could be given to him!” Or, “If only he could possess an orchard from which he eats!” The transgressors also said, “You are following a bewitched man.”