Jealousy Condemned
[2:105] Neither the disbelievers among the followers of the scripture, nor the idol worshipers, wish to see any blessings come down to you from your Lord. However, GOD showers His blessings upon whomever He chooses. GOD possesses infinite grace.

God possesses infinite grace, yet people who do not know God think that God’s resources are finite.

[17:100] Proclaim, “If you possessed my Lord’s treasures of mercy, you would have withheld them, fearing that you might exhaust them. The human being is stingy.”

What is the difference between jealousy and envy?

Jealousy unlike envy is the belief that God’s mercy, provisions, blessings are a zero-sum game, such that God rewarding some is taking away from the reward from others.

Why are the disbelievers among the followers of the scripture, or the idol worshipers jealous of the believers? Why not just join them and reap in God’s benefits?

Jealousy is an attribute of the ego where we want what others have.

Jealousy and fairness are related and we see that even monkey’s have a sense of fairness in them, and since monkey’s have no ego there should be something more to jealousy.

People are jealous because they only see the cross-section of someone’s life where they get the achievement and not all the hard work and backstory that it took to get there. God sees everything we all do and knows who is most deserving of what reward, and sometimes what appears to be a reward for someone else is actually their downfall.

[6:124] When a powerful proof comes to them, they say, “We will not believe, unless we are given what is given to GOD’s messengers!” GOD knows exactly who is best qualified to deliver His message. Such criminals will suffer debasement at GOD, and terrible retribution as a consequence of their evil scheming.

Qaaroon
[28:76] Qaaroon (the slave driver) was one of Moses’ people who betrayed them and oppressed them. We gave him so many treasures that the keys thereof were almost too heavy for the strongest band. His people said to him, “Do not be so arrogant; GOD does not love those who are arrogant.
[28:77] “Use the provisions bestowed upon you by GOD to seek the abode of the Hereafter, without neglecting your share in this world. Be charitable, as GOD has been charitable towards you. Do not keep on corrupting the earth. GOD does not love the corruptors.”
[28:78] He said, “I attained all this because of my own cleverness.” Did he not realize that GOD had annihilated before him generations that were much stronger than he, and greater in number? The (annihilated) transgressors were not asked about their crimes.
[28:79] One day, he came out to his people in full splendor. Those who preferred this worldly life said, “Oh, we wish that we possessed what Qaaroon has attained. Indeed, he is very fortunate.”

The Real Wealth
[28:80] As for those who were blessed with knowledge, they said, “Woe to you, GOD’s recompense is far better for those who believe and lead a righteous life.” None attains this except the steadfast.

The Tyrants’ Inevitable Fate
[28:81] We then caused the earth to swallow him and his mansion. No army could have helped him against GOD; he was not destined to be a winner.
[28:82] Those who were envious of him the day before said, “Now we realize that GOD is the One who provides for whomever He chooses from among His servants, and withholds. If it were not for GOD’s grace towards us, He could have caused the earth to swallow us too. We now realize that the disbelievers never succeed.”

[19:70] We know full well those who are most deserving of burning therein.

Jealousy comes from ego that thinking that I am better

[7:12] He said, “What prevented you from prostrating when I ordered you?” He said, “I am better than he; You created me from fire, and created him from mud.”

[2:87] We gave Moses the scripture, and subsequent to him we sent other messengers, and we gave Jesus, son of Mary, profound miracles and supported him with the Holy Spirit. Is it not a fact that every time a messenger went to you with anything you disliked, your ego caused you to be arrogant? Some of them you rejected, and some of them you killed.

Jealousy is about losing something..i.e. power, money etc. The people of previous scripture feel like they are losing God’s favor.

Lack of confidence in God = Jealousy

[2:247] Their prophet said to them, “GOD has appointed Taloot (Saul) to be your king.” They said, “How can he have kingship over us when we are more worthy of kingship than he; he is not even rich?” He said, “GOD has chosen him over you, and has blessed him with an abundance in knowledge and in body.” GOD grants His kingship to whomever He wills. GOD is Bounteous, Omniscient.

Jealousy in s society can be very destructive. In some countries the thought of someone else being successful is looked at negatively, but in the US especially in Silicon Valley it is looked in a positive light. Because people in the US see someone else successful and think good for them if they too work hard they can achieve that same status. 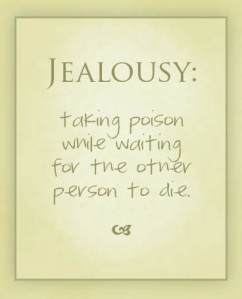 One example of destructive jealousy can be seen in the game show “Who Wants to Be a Millionaire.” In some countries the audience members will attempt to sabotage the contestant because they don’t think they are worthy of winning. In the US the audience will typically try their best to help the contestant succeed.

Jealousy is removed from our hearts when we make it to heaven. One can have jealousy and still make it to heavan, but in heaven we will be cleansed of this deficiency

What research do we know behind the brain effects of jealousy?

God tells us to compete in righteousness (5:48). Does jealousy fuel competition?

When we compete in righteousness we realize that someone else’s victory does not mean our loss.

Believing Nations Prosper
[10:98] Any community that believes will surely be rewarded for believing. For example, the people of Jonah: when they believed, we relieved the humiliating retribution they had been suffering in this world, and we made them prosperous.